For the smallest Catholic diocese in the U.S., the Knoxville diocese knows how to draw a crowd of movers and shakers.

At the April 19 groundbreaking for the new $25 million cathedral, the lineup of both secular and non-secular dignitaries attending a weekend of events was impressive.

The list included a trio of cardinals – Cardinal Justin Rigali, who now lives in Knoxville, Cardinal Timothy Dolan, archbishop of New York, and Cardinal William Levada, prefect emeritus of the Congregation for the Doctrine of the Faith based in Rome. They were joined by bishops and other Catholic Church leaders from across Tennessee, neighboring states and around the country. 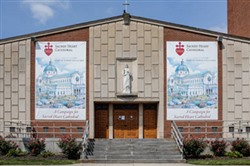 Sacred Heart will be replaced by a new $25 million cathedral, the first “ground-up” cathedral built by the Knoxville diocese.

From the political world there was Gov. Bill Haslam, Knoxville Mayor Madeline Rogero, Knox County Mayor Tim Burchett and state Sen. Becky Duncan Massey. From the University of Tennessee there was President Joe DiPietro and head football coach Butch Jones, who is a member of the cathedral parish.

“The very first ground-up cathedral ever built in the diocese – it’ll be a source of pride and a center of worship for us for years to come,” the governor said in remarks at the groundbreaking.

Building a new cathedral has been talked about since the Knoxville diocese was founded in 1988 and Sacred Heart Church on S. Northshore Drive was designated as the diocese cathedral, but the existing church was not enlarged.

However, early leaders of the Knoxville diocese knew that before investing in a new cathedral they had to strengthen the diocese and its parishes, Knoxville Bishop Richard Stika said in a recent interview in his office next door to the existing Sacred Heart Cathedral.

Now, nearly three decades after the Knoxville diocese was spun off from the Nashville diocese, the time was right to build a new cathedral that will be the home church for 51 parishes stretching from Chattanooga to the Tri-Cities in Upper East Tennessee.

“It’s been 27 years coming,” says Stika of the new cathedral that he described as a powerful symbol of the growth and work of the Catholic Church in East Tennessee.

The new cathedral is part of an overall $30 million project that includes turning the existing cathedral into an auditorium and social hall and renovation of Sacred Heart Cathedral School. A portion of the money raised for the construction project will be designated for the diocese’s ongoing work to help the poor.

“When our diocese was created they just took the largest church in Knoxville, which it is no longer, (and made it the cathedral),” Stika said during the groundbreaking.

“So this is really the time when our diocese comes together from all across East Tennessee to say we’re making a statement: this is our home; this is why we’re staying at this location.”

Preliminary site and construction work began in the spring. Building of the new cathedral, which will be built on land near the existing cathedral, is expected to start in the fall with completion scheduled for September 2017.

Some 400 parishioners joined the diocese last year, making Knoxville the 10th-fastest-growing diocese in the country in 2014, tied with Memphis, Stika points out. Nashville was No. 8 last year.

The growth of the Knoxville diocese has been fueled, in part, by retirees and others moving from states in the Midwest and north, as well as immigrants from Vietnam, the Philippines, Mexico and other countries.

That growth has put pressure on existing facilities.

“Under current constraints, the church is unable to hold even the children who attend Sacred Heart Cathedral School,” Father David Boettner, rector of Sacred Heart Cathedral, said in a news release. “We are literally bursting at the seams and have weekly challenges with logistics and space.

“But we are a church that is committed to the city, and because of that, we want to remain in our current location and upgrade the space to suit the growing needs of Catholics and others in our region.”

The new cathedral will increase worship space from 7,500 to 20,000 square-feet and provide seating for about 1,000, double the current capacity. In addition, it will have more than 15,000 square-feet of new meeting space.

The project includes a comprehensive renovation of Sacred Heart School, new parking, road, bridge and circulation plan; and the new cathedral itself will have a choir loft, baptismal font, confessional and vesting areas and a state-of-the-art HVAC system that will heat and cool specific areas of the building only when they are in use.

Construction of a new bridge over Fourth Creek and new entry way onto the cathedral campus began shortly after the groundbreaking. Work on the school renovation began in June and is scheduled to be completed by Sept. 2.

The new cathedral will have a traditional cruciform structure and will feature an eight-sided dome, a reference to the resurrection of Christ on the “eighth” day of the week. The cathedral was designed by the Washington, D.C. firm McCrery Architects in collaboration with BarberMcMurry Architect of Knoxville.

Art will be a big part of the new cathedral’s visual presentation, Stika says.

“Historically art always uplifts the human person,” he adds. “ … Good art is something that lasts for centuries. Catholic churches have always had in their design a way to teach so that when you enter a Catholic church with the stained glass windows you might see the life of Jesus or the life of the Saints.”

Although the new cathedral’s art will reflect the beauty and culture of Tennessee, not everything in popular culture will find its way into the new building. “No moonshine, no Jack Daniels,” Stika jokes.